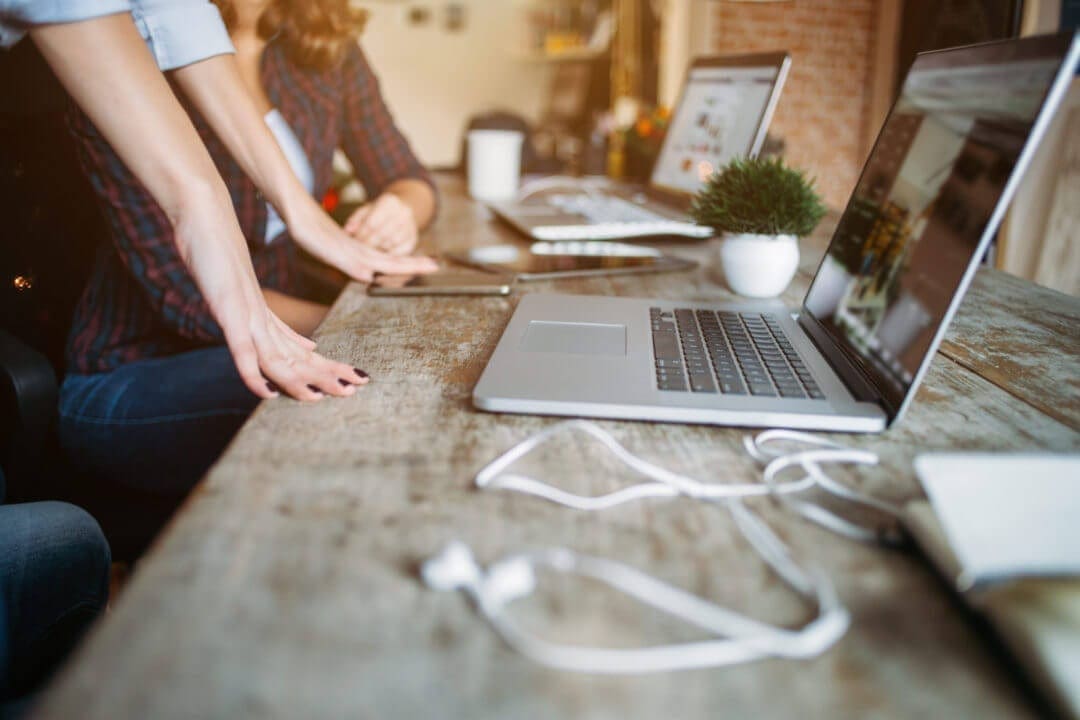 The ways in which our bodies interact with electromagnetic fields have been studied for a long time and are well understood. Products that generate electromagnetic fields are regulated by regional authorities (e.g. FCC in the United States) to ensure specified safety standards are met. Any product which meets or exceeds the safety requirements is determined to be safe. Products which do not meet the safety criteria are not authorized to be sold.

Can you explain how electromagnetic fields interact with our bodies?

Electric and magnetic fields are both categories of electromagnetic fields. Whenever a time varying electric field exists, there is a corresponding magnetic field and vice-versa. Sometimes fields which have dominant electric potential are distinguished from those that have dominant magnetic potential. Each of these types of fields have different effects on the body and may behave differently around various types of materials. In this sense, it can be important to distinguish between the two types of fields and which is dominant. Wireless power transfer technology such as magnetic induction and magnetic resonance are based on transferring energy using the magnetic field component in the reactive near-field region. These reactive near-fields are non-radiative and fall off with distance at a rate much faster than far-field RF technology like Wi-Fi, cell phones, etc.

Do cell phones emit electromagnetic fields like wireless power does?

Yes. Like other products that use electromagnetic energy e.g. Wi-Fi, Bluetooth, etc., cell phones also emit electromagnetic radiation. Like all products that emit radiation, both cell phones and wireless power systems are regulated and required to meet certain standards. Cell phones are most commonly referenced because of how mobile they are and how close to the body they are used (e.g. holding a phone next to your ear / head). Since cell phones must interact with base stations that are physically far from the user and the user is often holding the phone next to his/her head, RF exposure caused by cell phones can be higher compared to other types of products.

Who decides what are safe electric and magnetic field levels?

Each country determines which local regulatory body governs safety of non-ionizing electromagnetic radiation, often referred to as radio frequency (RF) exposure. In the United States of America (U.S.A.), the FCC sets regulations for RF exposure in Title 47, Chapter 1 of the Code of Federal Regulations (see § 1.1307, § 1.1310, § 2.1091, and § 2.1093). In other countries, there is usually a regional governing body in charge of setting regulations. Most regional governing bodies base regulations on well-known guidelines, studies, and standards that are published. The most common and well-known guidelines are produced by the International Commission on Non-Ionizing Radiation Protection (ICNIRP – www.icnirp.org) and the Institute of Electrical and Electronics Engineers (IEEE – www.ices-emfsafety.org/).

Who decides what level of RF exposure is safe and where are these guidelines?

In general, each region has different restrictions with respect to RF exposure requirements. The most commonly accepted guidelines globally are produced by ICNIRP and IEEE’s International Committee on Electromagnetic safety, although many countries including the U.S.A. have similar but different restrictions so it’s important to check the specific restrictions for each region. Specific guidelines for wireless power in the U.S.A. can be found here and here.

The applicable ICNIRP documents are the electromagnetic field guidelines from 2020 (which cover from 100 kHz to 300 GHz) and the 2010 EMF guidelines that still apply from 1Hz to 100 kHz.

The latest applicable IEEE document is IEEE C95.1-2019 that covers exposure guidelines from 0 Hz to 300 GHz.

Can different countries differ on what is safe?

Yes. Local regulations may differ from country to country, however, most follow similar guidelines.

Method 1 uses ambient measured electric and magnetic field levels and is the simplest way to confirm compliance, although very conservative. These fields can simply be measured using a field meter in any area that would be exposed to a human. If the measured field levels are below the specified reference level, then the RF exposure level is considered safe and the requirements met.

In method 2, compliance is determined by showing that any RF exposure does not exceed limits set for SAR and induced electric field (sometimes referred to as “Basic Restrictions”). For higher frequency ranges (above a few MHz), techniques have been developed and approved using basic fluids that mimic the EM properties of the human body to measure SAR. For lower frequencies, measurement methods have not yet been approved so validated simulation models must be used to show compliance. Both SAR and Ei limits must be met. Many people are familiar with cell phones and are familiar with or understand SAR very well; however, not many people are familiar Ei. The reason for this is simple: above 1 to 2 MHz, SAR is the dominant limit and the Ei is so much lower in comparison that it can be neglected (see figure below). Below 1-2 MHz the Ei is the dominant restriction that must be met, and SAR becomes negligible in comparison. 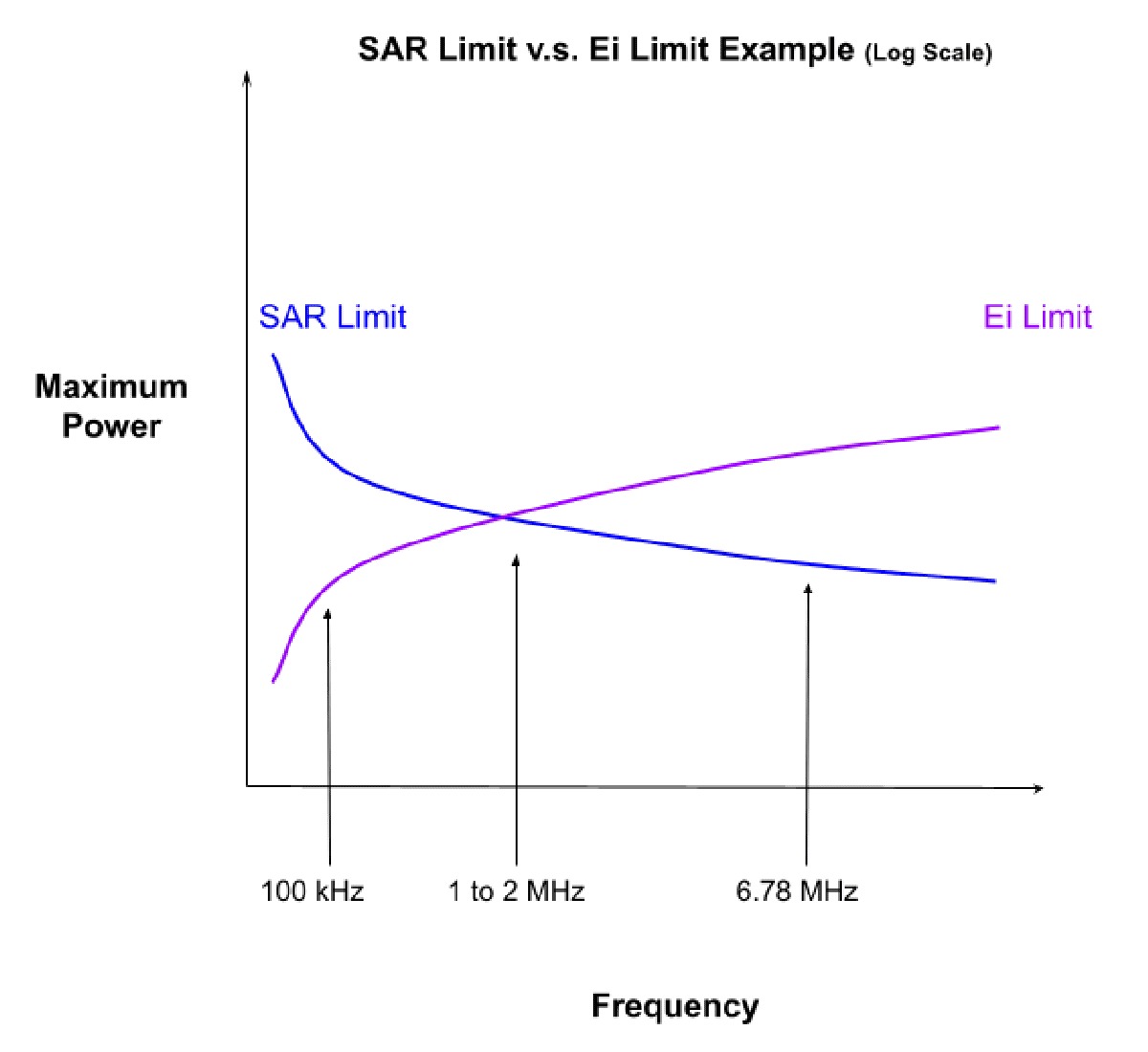 Today the SAR measurement techniques are only available for 4 MHz to 6 GHz and above (where the SAR limit dominates). Therefore, companies producing products that do not meet reference levels and operate at less than 4 MHz must prove by detailed validation and simulation using human body models with the associated systems that the basic restrictions (both Ei and SAR) are met. The FCC in the U.S.A., for example, has a process that must be followed for code validation and the simulation, and then they review the simulation and results to ensure that the limits are met with reasonable confidence for any reasonable human interaction of the product (see FCC KDB 680106 attachment).

For 6.78 MHz high frequency wireless power (AirFuel Resonant), there is an example of a commercial 30 W product that passed SAR using a measurement system (not simulation). Details can be found here.

The inductive systems that we are aware of have historically operated from ~100 to 300 kHz (though technically they could operate at other frequencies). Resonant systems have been in operation from 20 kHz to 20 MHz, however, the AirFuel Magnetic Resonance standard utilizes 6.78 MHz for a number of great reasons. The difference between inductive and resonant systems is determined (from a user point-of-view) based on freedom of movement, ability to operate through thick surfaces, and efficiency of operation over that range of freedom. Inductive systems typically have the same or similar size coils on the receiver and transmitter and require very high coupling (and hence tend to be lower quality factors). Resonant systems on the other hand do not need matched coil sizes, can operate over a wide range of coupling, and are typically high-quality factors (meaning less loss on the coil and so less heating of the coil as well).

Historically inductive systems (such as Qi) have been able to get away with just using RF exposure reference levels rather than having to meet the basic restrictions. This is possible simply because very little field is exposed since each coil is in close proximity and the field is turned off when the other coil is not tightly coupled. This, in turn, means that the only test is a measurement of field level being below the designated reference level for a given region. On the other hand, if that same system operating at 100 to 300 kHz were a resonant system (or even a very poor inductive system) and had mismatched coils to allow for greater spatial freedom than the field level of exposure may exceed the reference level. This in itself is not a problem; however, the vendor would be required, through tedious simulation (due to lack of measurement tools available below 4 MHz), to show that the basic restrictions are met (Ei in particular).

The AirFuel Magnetic Resonant wireless power system operates at 6.78 MHz. The higher frequency provides some substantial benefits over lower frequencies (independent of whether the lower frequencies are based on resonance or inductive coupling). At 6.78 MHz, high Q (low loss) coils are possible using simple copper traces on a PCB or other common additive / subtractive processes that are already ubiquitous in electronics. Furthermore, eddy current losses induced in nearby metal objects are reduced with the square root of the frequency increase. This means that simple metal objects such as coins, washers, keys, etc. that easily heat up in the 100 – 300 kHz range are virtually unseen and don’t heat up at all by the systems operating at 6.78 MHz. Furthermore 6.78 MHz is an ISM band with unlimited radiation capability in most parts of the world. It is a frequency currently recommended by ITU-R for consumer device wireless power transfer since it is recognized as having minimal or non-existent impact to other licensed bands. 100-300 kHz on the other hand, does have some areas of concern for certain LF and MF licensed broadcast bands and so very careful consideration has to be given at those frequencies.

If you’re interested in more information concerning wireless power and safety, please review our “Step by Step” webinar hosted by Ky Sealy or our “How to Keep Wireless Power Transfer Safe” webinar hosted by Dr. Eric van Rongen, chairman of ICNIRP on this topic.  You may also email either sanjay.gupta@airfuel.org, President of AirFuel Alliance, or ky.sealy@witricity.com, Head of AirFuel Resonant Working Committee & Senior Principal Engineer at WiTricity.

While this year's CES was dampened by the pandemic relapse, it still provided a podium for breakout tech-leaders to showcase their advancements and preview the year ahead in tech. At AirFuel Alliance, the main question we ask is “What do the products featuring...

END_OF_DOCUMENT_TOKEN_TO_BE_REPLACED

Wireless Charging in the Big Apple

A Recap of our November Event in New York City On November 18th, a surprising 70 degree fall day in New York, AirFuel Alliance hosted a highly-curated networking event for wireless power industry executives and insiders. After long months of COVID isolation, it was...