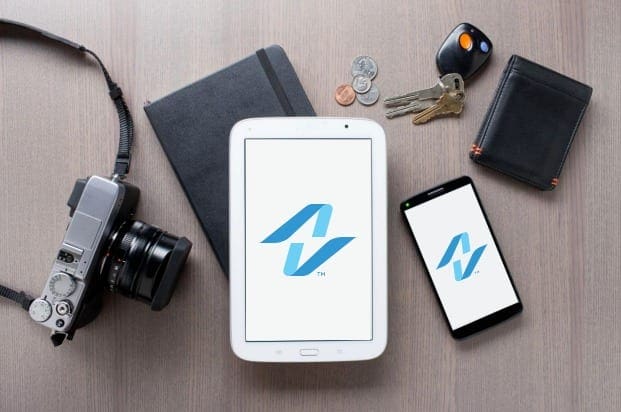 The first generation wireless power technology on the market today has a dirty secret. Inductive wireless power has a tendency to heat common metal objects, such as coins and car keys.

To get around this hurdle, inductive is often programmed to stop the flow of power when it detects metal in the vicinity. The result is a technology that is fighting an uphill battle to downplay its technical shortcomings, and the market is starting to recognize that maybe inductive wireless power technology cannot deliver the wireless power experience that customers envision. One of the most notable cases of this was in April, when Apple abandoned their inductive-based AirPower initiative.

We’ve already explored how the wireless power market will move past AirPower, but what is the path forward to overcome the issue of heating coins, keys, and other common metal items that our tech will encounter?

Looking for answers in physics fundamentals

So, how do we apply this to wireless power transfer?

Raising the frequency with magnetic resonance

AirFuel Alliance member companies have tested a number of different metal objects to confirm the lack of power absorption in metals at 6.78 MHz. Results of the 115 kHz and 6.78 MHz systems testing are shown in the figure below. 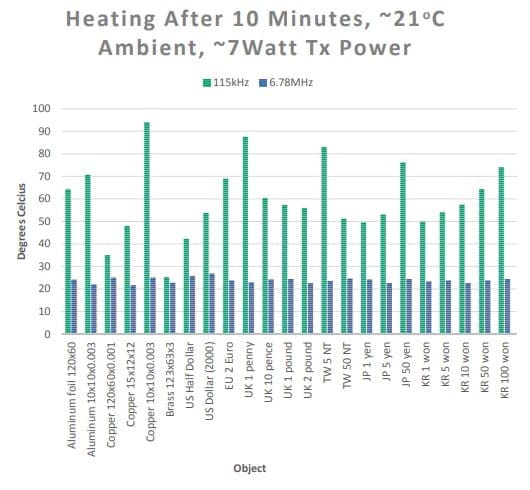 You’ll notice from the measurements that wireless power operation at 6.78 MHz generally yields lower heating of objects than at 115 kHz (a nominal frequency for another WPT standard) with the exception of the CD case. In order to understand this better, there are 4 principles that are useful to understand regarding eddy currents and object heating:

Let’s discuss each of these at a high level:

Conductivity of the metal

Sometimes this means that in many cases copper (high conductivity) can heat up much less than steel (lower conductivity). This principle is useful in understanding why different metals heat up differently even if they are otherwise identical.

Effect of frequency and field level when eddy current is uniform

When considering the general affect of power dissipation caused by eddy currents, where skin effect is neglected, this Wikipedia explanation of eddy currents can be useful. Care should be taken to note the assumptions!

In this case, you can see that as the frequency increases or the field increases, the eddy current increases proportionally and this means the power dissipation increases by the square. This is only true when neglecting skin effect; however skin effect cannot be neglected when it dominates the effect as is the case in most objects. The thickness must be below 1/10th or less the skin depth to even consider the above power dissipation equation. 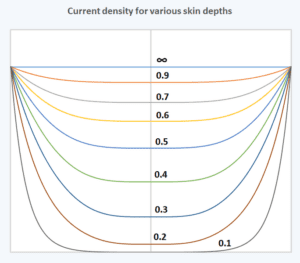 Frequency of field and skin depth

Skin effect is very important for most objects – especially for wireless power transfer frequencies (probably not as much for very low frequencies such as 50 or 60 Hz, etc.). The penetration depth can dominate the effects of power dissipation due to eddy currents – especially at higher frequencies.

The reason Ampere’s Law and Faraday’s Law are important principles to consider with respect to metal object heating is because these directly affect the field level (along with some optimization considerations not discussed here). In simplest terms, Faraday’s law says that the induced voltage on a receiving coil is proportional to the field level, the field frequency, and the magnetic area of that coil (including number of turns).

Now consider the 4 principles above together. First, we can generally state (principle 4 above) that for a given WPT system whenever the frequency of operation increases (and the WPT is redesigned for that frequency) then the field level will proportionally decrease. This means (for principle 2 above) that when skin depth is neglected, there should be no overall change in power dissipation in a metal object caused by the WPT system. However, there is a significant decrease in most cases because of the skin effect (principle 3); and in this case, the depth and hence power dissipation decreases with the square root of the frequency increase. The only exception to this is for a very thin metal (microns thick) such as those found on CD’s. Note that metal foils are not thin enough for operation at 6.78 MHz – only specific metallic coatings.

AirFuel Resonant wireless charging systems have a number of features designed to maximize the user experience in the home, car, office and public areas. In addition to inherently tolerating the presence of common metal objects (e.g., keys, coins, paper clips, stickers, and more), AirFuel Resonance has more benefits including:

It is through technology advancements like AirFuel Resonant that we will accelerate the adoption of wireless power and achieve a world where we can power up without plugging in.

END_OF_DOCUMENT_TOKEN_TO_BE_REPLACED

On the last episode of this season, we welcome Daniela Raddino, Senior Engineer at Rohde & Schwarz. A researcher and author with multiple patents and deep expertise in the wireless power transfer space, Daniela shares the company's vision for...

END_OF_DOCUMENT_TOKEN_TO_BE_REPLACED

Welcome to another great episode of Our World Without Wires. Today, Paul Mitcheson joins us from Imperial College London. Dr. Mitcheson is a researcher and highly regarded expert in energy harvesting systems, wireless power transfer, and power electronics. He sits on...

END_OF_DOCUMENT_TOKEN_TO_BE_REPLACED

Today, on Our World Without Wires, we are joined by Professor Naoki Shinohara from Kyoto University, a prolific researcher, author, and wireless power industry expert with a Ph.D. in electrical engineering. Dr. Shinohara is going to discuss RF wireless power transfer...

END_OF_DOCUMENT_TOKEN_TO_BE_REPLACED

How Will The New EU Mandate Affect Wireless Power?

With the proliferation of charging cables, bricks, and cords that vary from device to device, the European Union has handed down a mandate that common consumer electronics sold in the EU will be required to have a USBC charging port, eliminating the need for multiple...

END_OF_DOCUMENT_TOKEN_TO_BE_REPLACED

In the newest episode of Our World Without Wires Sanjay welcomes Paul Davis and Paul Husted as our guests. Paul Davis is the Senior Director of Product Management at Atmosic Technologies. For over 25 years, he has been involved in the definition, development, and...

END_OF_DOCUMENT_TOKEN_TO_BE_REPLACED

Can EVs Be Accessible for Everyone?

In episode 6 of Our World Without Wires. Sanjay welcomes D'Arcee Neal as our guest, D'Arcee is on a mission to make EV charging accessible to everyone. Formerly working at NASA and the Department of labor, he is a fourth-year doctoral candidate at the Ohio State...

END_OF_DOCUMENT_TOKEN_TO_BE_REPLACED

How Does Wireless Power Enable the Rise of Machines?

Check out our new podcast Our World Without Wires, hosted by AirFuel President Sanjay Gupta! In our second episode Sanjay and Energous CEO, Cesar Johnston dive into the question of how is wireless power enabling the rise of machines? Read below to see how wireless...